The Guardian reports that Prince Andrew was seen at financier Jeffrey Epstein’s house.  There is reference to Paul Keating’s daughter been waved off by Prince Andrew.

Fiona Barrett reportedly took her allegations to the Royal Commission, as indicated on her blog https://fionabarnett.org/

Another link is to footage apparently taken of a naked male climbing out a window at Buckingham Palance.  The public are filmed smiling which indicates it is not manufactured.

I note some refutations indicate both stories are hoaxes or smear campaigns.  Whatever the case the truth must be investigated in the public interest to ensure it is clear and that either innocent people are not smeared or those harmed are able to call for justice and to have series matters heard by a neutral Judge in a Court.

I am not an advocate of trial by media but I am aware that there appears to be rigidities in respect of the law when it comes to high profiled people protected. No person is above the law or should be. All allegations must be investigated by independent and reputable investigators. My suggestion would be reputable human rights lawyers such as Geoffrey Robertson QC.

The story below is from the Guardian https://www.msn.com/en-au/news/world/prince-andrew-was-seen-getting-foot-massage-from-young-woman-at-epsteins-apartment-–-report/ar-AAGd24G?ocid=spartanntp

© Getty Images Prince Andrew. Prince Andrew was seen inside the New York apartment of disgraced financier Jeffrey Epstein getting a foot massage from a young woman, according to an email exchange between a prominent US literary agent and author and writer Evgeny Morozov.

In the exchange, published in the New Republic magazine, agent John Brockman recommends to writer Morozov (who he represents as literary agent) that he meet with Epstein, calling him a “billionaire science philanthropist” who has “been extremely generous in funding projects of many of our friends and clients”.

In the piece in the New Republic Morozov says he is writing to explain why he is on the point of cutting ties with Brockman on account of his continuing silence since details emerged of the book agent’s connections to Epstein in the last few weeks. The literary agent, as Morozov points out, has remained silent. “John has been in the news because of his troubling connections to Jeffrey Epstein,” writes Morozov.

He then cites an email exchange between himself and Brockman from 2013: “It’s been more than a month since Epstein was arrested on the latest charges. Still, no word on the issue. And, now that I’ve found that old email he sent me, I cannot believe that he knew absolutely nothing of Epstein’s wild sexual escapades.”

© Getty Prince Andrew, Duke of York leaves the funeral service of Patricia Knatchbull, Countess Mountbatten of Burma at St Paul’s Church in Knightsbridge on June 27, 2017 in London, England. Having detailed the contents of the email exchange – including references to Prince Andrew – Morozov concludes, “ I am ready to pull the plug on my association with Brockman’s agency – and would encourage other authors to consider doing the same – until and unless he clarifies the relationship between him … and Epstein.” The Guardian wrote about Epstein’s friendships with a host of renowned scientists, some of whom were introduced by Brockman.

The Guardian has reached out to Brockman and not yet received a reply. Brockman also declined to respond to Morozov’s request for comment in the New Republic.

In the emails between Morozov (a regular contributor to the Guardian) and Brockman, dated 12 September 2013, the literary agent recounts visiting Epstein at his Manhattan house.

He writes: “Last time I visited his house (the largest private residence in NYC), I walked in to find him in a sweatsuit and a British guy in a suit with suspenders [braces], getting foot massages from two young well-dressed Russian women.”

“After grilling me for a while about cyber-security, the Brit, named Andy, was commenting on the Swedish authorities and the charges against Julian Assange. We think they’re liberal in Sweden, but its more like Northern England as opposed to Southern Europe,” Brockman reports “Andy” as saying. 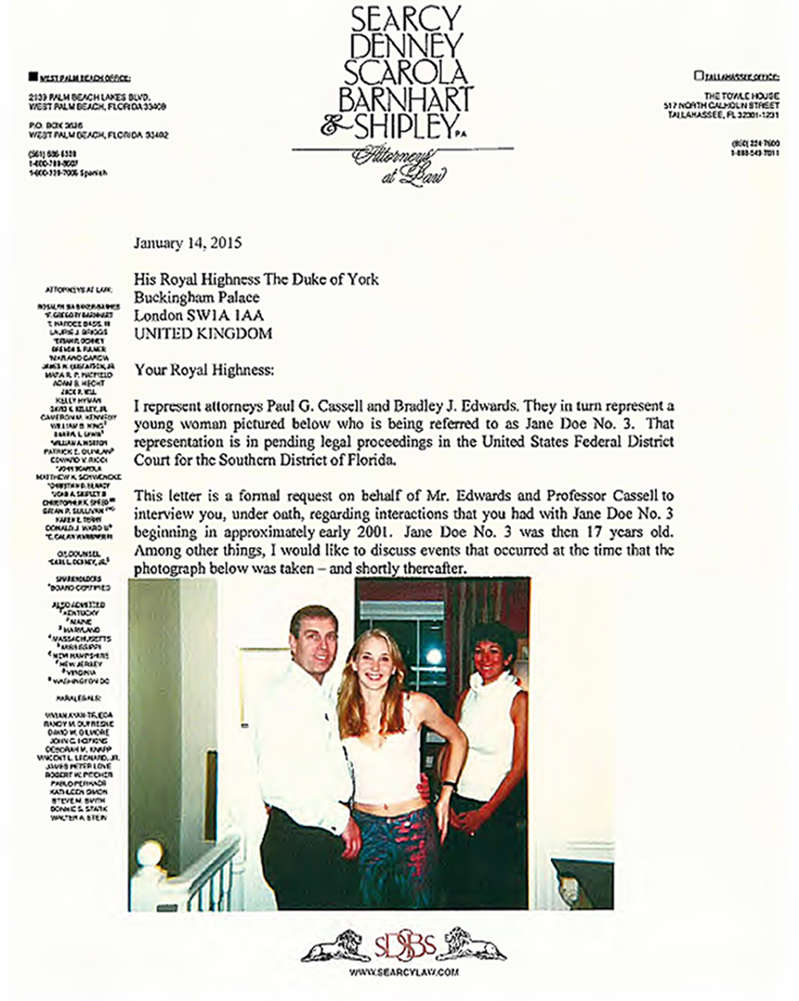 © Press Association Undated handout image taken from a legal document issued by the Court of Florida of a letter from lawyers for Virginia Roberts, who claims she was made to have under-age sex with Prince Andrew, formally requested that he respond to her allegations under oath.

Brockman writes that Andrew then complained about his public profile. “In Monaco, Albert works 12 hours a day but at 9pm, when he goes out, he does whatever he wants, and nobody cares. But, if I do it, I’m in big trouble.”,” the emails describe him saying.

At that point, Brockman writes: “I realized that the recipient of Irina’s foot massage was his Royal Highness, Prince Andrew, the Duke of York.”

Buckingham Palace has previously said Andrew was appalled by recent revelations about Epstein. In a statement to the Guardian on Thursday it said: “Any suggestion of impropriety with underage minors is categorically untrue.”

Brockman concludes the email by writing that a week later “on a slow news day the cover of the NYPost had a full-page photo of Jeffrey and Andrew walking in Central Park under the headline: ‘The Prince and the Perv.’ (That was the end of Andrew’s role at the UK trade ambassador.)”

A video taken a day later, on 10 December 2010, showed the duke waving goodbye to a dark-haired woman, identified in media reports as Katherine Keating, daughter of the former Australian prime minister Paul Keating.

Brockman is a literary agent who has represented famous science authors such as Stephen Hawking and Jared Diamond. He also heads the Edge Foundation which seeks to spark debate and conversations between scientists, artists and intellectuals and is known for its luxurious international meetings.

Buckingham Palace has strenously denied any allegations of wrongdoing linked to his relationship with Epstein. 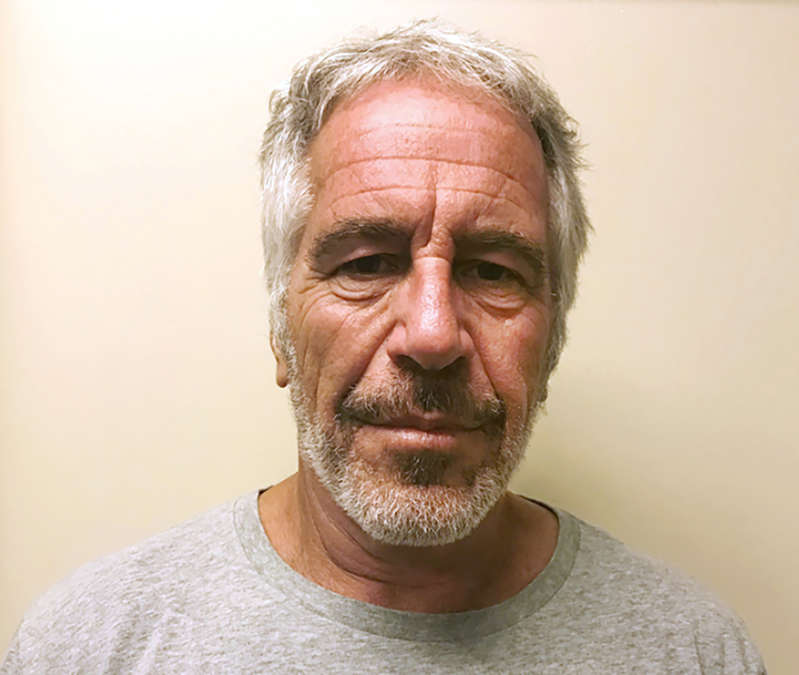 © ASSOCIATED PRESS This March 28, 2017, file photo, provided by the New York State Sex Offender Registry, shows Jeffrey Epstein. In a statement released on Sunday, Buckingham Palace said Andrew was “appalled by the recent reports of Jeffrey Epstein’s alleged crimes”. It said he “deplores the exploitation of any human being and the suggestion he would condone, participate in or encourage any such behaviour is abhorrent”.

Andrew reportedly met Epstein in the late 1990s, after being introduced by Epstein’s then girlfriend Ghislaine Maxwell, the daughter of the press baron Robert Maxwell.

Ghislaine Maxwell, whose whereabouts are currently unknown, has previously denied any wrongdoing.

It was in Maxwell’s London home that a photograph was taken in 2001 capturing Andrew his arm around Virginia Giuffre – a 17-year-old, then known as Virginia Roberts, who has alleged in court documents that Epstein coerced her into “sexual relations” with Andrew in London, New York and on Epstein’s private island in the US Virgin Islands.

When they emerged those allegations also prompted a forceful denial from Buckingham Palace, which vehemently denied there was “any form of sexual contact or relationship” between Andrew and Giuffre. “The allegations made are false and without any foundation,” the statement said. The allegations were later found to be immaterial and impertinent by the judge overseeing the case and struck out of the claim.