I have felt led to this article in the holy land. Perhaps there are unholy alliances.  What we do to others returns to the self, this is a universal law. There has been great suffering in Palestine.  We can label people this or that, at the end of the day the moment we violate another human being we violate ourselves.  We can’t stand before anyone and speak of our own historic abuse. Nazism is not about Germany it is a mind-set that has to dominate. Militarism is a vehicle to normalise abuse, often in police interrogations as we saw at Guantanamo interrogators have licence to harm another as they are deemed the “enemy”.

I wish to contemplate this part of the world silently.  I feel the wall taking up 15% of Palestine.  Many fleeing in terror.  I see a woman standing in front of a bulldozer, she is American.  She is stopping the building of settlements, she dies.  I feel the Orthodox Jews, I feel them wailing at the wall of their own making. Their hearts became hard as their cannot confront their guilt as their own people were horrifically persecuted.  I see myself holding hands with a Jewish woman in Carlsbad who was a holocaust survivor, the great love we both taught.  I feel for zionism the political movement and see the supreme court.  I feel myself washing the feet, this feels as humility. I see the blood in the middle east, a treadmill many cannot get off.  I send love to those being tortured and exterminated. Those who are treated as sub human. Human rights is simply the right to be human. I feel the woman as vulnerable and targeted to those seeking power. The woman is the mother, she is the barer of life. She is the water barer. Harming a woman is harming your mother. It is disrespecting life. Radicalisation happens when moderate people are abused to the point of desperation, they form groups for protection as their are no human rights in a prison camp. The all seeing eye is watching. I see tears falling. A silent witness to crimes against God. Yet this very essence sees the pain in all parties attempting to be right when it is god’s desire all be happy. Until we find The Way we remain enslaved, everyone, to fear and abuse which is not freedom. To break the cycle of violence one must turn the accusing finger inward as all violence starts from denial. It is a deep anger projected outward and then to label this anger ‘enemy’. The enemy is never outside of you. We see as we are not as they are. Remember that my friends.

Below this article is Australia’s position. I wonder how women in Australia will feel a woman standing in the US not loving Israel enough to assist them to find their way out of endless abuse, particularly against women. Marise I would say that ‘She is you’ ‘You are she’. A true friend guides another away from violence. Some believe that violence is control it is actually pain projected outward. Perhaps we have to look at the roots of domestic violence here and why it is happening. that includes police violence against women, partner violence, structural violence (poverty), wage inequality and misogyny as a feature of powerlessness in men. How do we help them to find true power? How do we help them to heal their pain turned outward? That is what love will do.

I feel inspired overnight to add I was contemplating the Anti-Discrimination Act and the removal of insult and offend from this legislation. I feel strongly given the article below it should be back in legislation until people learn to humiliate, offend and insult is verbal violence, it can often be worse than physical violence.  War is not peace.

Palestinian Woman Speaks About Her Sexual Abuse in Israeli Jail 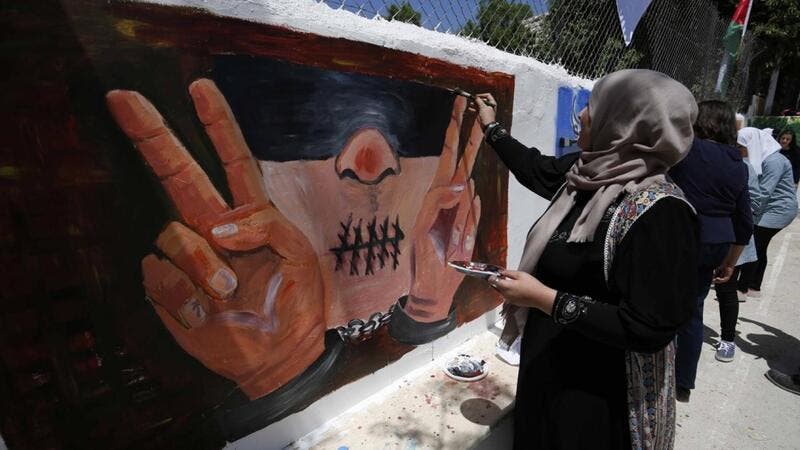 Dena Karmi, 41, a Palestinian woman, who spent 16 months in Israeli prison recalls a harrowing tale of sexual abuse, she faced behind the bars.

Her body is still trembling while narrating the interrogation sessions during nights by male Israeli intelligence officers. At every moment, she was humiliated, and closer to extreme sexual abuse.

Like Karmi, many Palestinian women, have reported sexual abuse, ranging from exposition to extreme cavity searches at the time of admission in the Israeli prisons.

Speaking to Anadolu Agency, Karmi said that she was subjected to sexual harassment for two days in Ashqelon Interrogation Center.

“When I refused to take my clothes off, the jailer attacked me. She ruptured my pants and subjected me to embarrassing searches,” she said while describing her first moments in the detention center.

Karmi was arrested in July 2018 from her house in Hebron – a Palestinian city in the southern West Bank, 30 km south of Jerusalem — and was sentenced to an imprisonment of 16 months.

She was held for allegedly participating in social activities linked to the Hamas resistance movement in the city of Hebron with six other women.

“The verbal sexual abuses are part of an organized policy to infuse humiliation and torture against all Palestinian detainees especially against women and children,” said Sahar Francis, director of Addameer (the Arabic word for conscience) – a prisoner support and human rights group.

She said that Israeli authorities have made sexual harassment a tool to put pressure on prisoners especially in the interrogation sessions.

Eight days after her detention in Shikma Prison in Ashkelon, Karmi was highly stressed and lost her consciousness several times.

According to her, interrogators exploited her situation and used colored language full of sexual innuendos.

Her husband Nashat Karmi was killed in 2010 by the Israeli army during a clash. Using her situation of living alone, the interrogators repeatedly accused her indulging in illegitimate sexual relations.

“This was very humiliating and horrific particularly when the interrogator was behaving promiscuously trying to provoke me. Sometime during interrogations at night, the male interrogator was trying to get closer, even showing his inappropriate photos in swimming suit bath,“ she said.

The Palestinian woman further said while her hands were cuffed behind, the interrogator used to come close breathing on her face.

He even accused her of having a sexual relationship with other intelligence officers, who had interrogated her earlier.

Karmi recalled that interrogation sessions, particularly during the nights were harrowing, as the officers were attempting to molest and using filthy and insulting language.

“He [interrogator] was threatening to subject me to sexual abuse. Then he took me with the jailers to a new cell. They spent many hours near the door laughing which made me scared. I believed he would enter the cell any time and sexually abuse me,” she said.

Another Palestinian prisoner in her early 30’s told Anadolu Agency that she was subjected to sexual harassment in the Israeli prison transfer vehicle known as the bosta, between Ramallah and Jerusalem.

“One of the Jewish criminal inmates sitting opposite to me in the bosta, began insulting me sexually. I was shocked and knocked at the metal cage aggressively seeking for help. But nobody responded to my appeals. The Jewish inmate took his pants off and did ugly sexual movements that I am unable to describe,” she said while requesting anonymity.

She said that no officer from Nahshon unit — responsible for transferring the prisoners — helped her or prevented the Jewish criminal from harassing her. She said the criminal prisoner continued to harass her for more than two hours.

“I was crying, praying, and asking God to help me,” she added.

Tasneem Jubran, a psychotherapist, and mental health care professional said that most Palestinian prisoners avoid talking about such experiences out of the fear of stigma, taking into consideration that the local culture treats sex as a shame.

“The sexual harassment is considered a trauma which leads to long-term physical and psychological damage in the relationship of the victim with herself and the surrounding. Almost it affects the sexual health of the victim if she does not have psychotherapy after liberation,” Jubran added.

The Addmeer’s activist Francis said that the Israeli justice system does not take the complaints related to sexual harassment seriously.

“We have documented and filed many complaints to the Israeli courts and the UN. But until now there is no effective response,” he said.

In 2015, Addameer filed a complaint against several policewomen who had physically harassed a Palestinian prisoner, subjecting her to strip search.

“The police investigated them but no indictment was filed. This was the only case where the police partially responded,” Francis added.

But in most cases, authorities have never responded.

“There is a failure to bring justice to victims of harassment locally and globally. The international humanitarian institutions have to take their role to hold those in charge accountable and bring them to justice” said Fransic, who is also a lawyer and has documented scores of complaints for over the past 10 years.

Around 4,300 Palestinians, including 41 women and 160 minors, are currently held in Israeli prisons, according to Palestinian figures.

This article has been adapted from its original source. 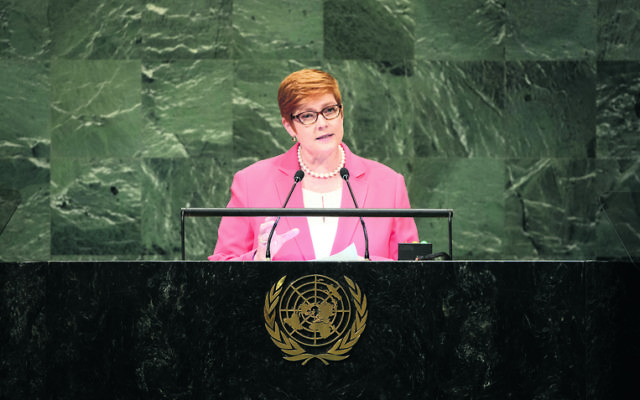 Australia opposed a resolution last weekend in the United Nations Economic and Social Council (ECOSOC) singling out Israel for the alleged mistreatment of Palestinian women and girls. No other country was similarly condemned.

“In the UN Human Rights Council, the UN General Assembly and many other UN forums, Australia has continued to highlight the unreasonable focus placed on Israel.

“We have the absurd situation of countries with terrible human rights’ records on women criticising Israel for discrimination that has actually occurred under Palestinian self-rule in Gaza and on the West Bank.”

So will someone bashed down my door because I am seeking the truth or I say something that is not mandated by the authority. This certainly feels like the implementation of a brave new world to usher in a new world order. Slowly people are starting to understand the reality of oppression. Thank god I left Melbourne. I will never live there again. Victoria feels like Nazi Germany now. Dan Andrews says he doesn’t mind if he is not popular. This is not about popular it is about abusing 5 million people who are not in danger or high risk of infection. Yet we are acting as if it is a high risk strategy for everyone. the nursing homes are institutional spaces, it could be brought in t facilities. We clearly need to protect them. I don’t hear of any cases of elderly in the community, why is that?

I vote for democracy not abuse of power. I vote for police that serve the public not dictatorships. I vote for justice and fairness which is the Australian way.

In the public interest.Ex-cop ‘disgusted’ by police state in Victoria speaks outAustralia:Ex-cop ‘disgusted’ by police state in Victoria speaks out Avi Yemini speaks to former police officer who is not happy about COVID-19 enforcement: ‘We feel like French Resistance in World War II.’Real concerns about the pregnant woman. He had concerns about the man whose door was broken down because of a Facebook post.

Woman has Dictator Dan on her t-shirt.

He says he feels like the French resistance.  He said he parked his car they got pulled up twice.  The whole feel the whole scenario is beyond what it should be.

Pour the money into the Aged Care and let everyone get on with their life.
It has gone too far.

The interviewer said he is a paid expert. I find that comment interesting.

The Irrefutable Argument Against Vaccine Safety – with Author Del Bigtree

This speaker is raising concerns about the future of our country.